We share some building blocks for rolling your own error reporter in Delphi. From intercepting unhandled exceptions, to retrieving a stack trace to symbolicating the error report. This part focuses on iOS. In the next part, we handle Android, which does things a bit differently.

We won’t cover Windows here, since there are already some very good tools available for this platform, such as EurekaLog and MadExcept.

You can find the accompanying source code on GitHub as part of the JustAddCode repository.

Note that we do not present a complete exception logging and tracking solution here. We merely present some building blocks that you can integrate into your own solution.

Why do you need an Error Reporter?

I know you write solid code and thoroughly test it before you release your app in the wild. But bad things happen. So you want to be notified about this so you can improve your app and those bad things become less and less likely. And your customers will be happier.

Also, you probably don’t have the resources to test your app on all types of devices out there (especially when it comes to Android), in all kinds of different scenarios. Some errors may only happen on devices you haven’t tested. So the only way to find out is to report them somehow.

There are existing crash reporting solutions for iOS and Android, like Crashlytics and Apteligent (formerly known as Crittercism). However, these tools are mostly geared towards Objective-C/Swift (iOS) and Java (Android) environments and hard or impractical to use with Delphi apps. In addition, these tools rely on debug information to symbolicate crash reports. The debug information that Delphi generates is incompatible or insufficient for these needs.

There are also (free) services like HockeyApp that allow you to post custom crash reports in your own format. So you can use the building blocks in this article to create a crash report and send it over to HockeyApp.

The easy way to intercept unhandled exceptions is by assigning the Application.OnException event. In the sample code for this article, we created a TgoExceptionReporter class. To have it handle the OnException event, you add this line to your code:

This certainly works, but is not enough. This event only gets fired for exceptions that are raised in the main (UI) thread. Unhandled exceptions in secondary threads are usually eaten and ignored by default.

To intercept exceptions from other threads, you can assign the global ExceptionAcquired routine. Finally, if there are still exceptions that aren’t handled by these two routines, then the global ExceptProc function variable called. By default, this is set to the ExceptHandler routine in System.SystemUtils. This just shows the exception to the user and terminates the app.

Arguably the most valuable information in your error report will be a stack trace that shows the call stack leading up to the exception.

iOS makes this fairly easy for us with an API called backtrace, which is available in the libSystem.dylib module. Delphi doesn’t provide an import for this API, but we can easily import it ourselves:

However, if you request the stack trace in the exception handler, then you are too late. By that time Delphi has already unwound the stack all the way up to the point the exception is finally handled, and the information that is left on the stack will most likely be useless at that point. Instead, you want to retrieve the stack trace as close to the location of the exception as possible.

Fortunately, Delphi provides a hook for us to hook into to get a stack trace. As you may have noticed, the Exception class has two properties called StackTrace and StackInfo. Now you may think “wait, if Delphi already provides this information, then why go through the trouble of getting a stack trace ourselves?”. Well Delphi doesn’t provide this information, and StackTrace will always return an empty string. Instead, it provides a hook for third parties (or yourself) to provide this information, through the static class variables GetExceptionStackInfoProc, CleanUpStackInfoProc and GetStackInfoStringProc of the Exception class. GetExceptionStackInfoProc gets called soon after the exception is raised, and this is where we need to retrieve the call stack. So we can hook into it like this:

The hook retrieves information about the exception and must return a pointer to some call stack information in a format that is up to you. For example, you can allocate some memory to hold up to 20 addresses (pointers), perform the stack trace, and return this memory. In our sample code, we dynamically allocate a record that contains both the call stack and the actual number of items in the call stack:

After the exception is handled and the exception object is destroyed, the CleanUpStackInfoProc hook is called to release any memory you allocated. So we need to hook this as well:

The TgoExceptionReporter class hooks both these routines to retrieve and release the call stack.

Then, in the actual exception handler, you can get to the call stack using the Exception.StackInfo property:

We’ll get to the GetCallStack method next.

Note that Delphi will call GetExceptionStackInfoProc for every exception that is raised, also for exceptions that will be handled. This adds some overhead to the exception raising process, so you want to do as little as possible in this hook. So in our example, we just retrieve the call stack, but don’t perform any symbolication yet. We only need to do that when the exception isn’t handled and it finally arrives at our exception reporter. You may think that retrieving the call stack is still quite a bit of overhead. But remember that raising exceptions is an “expensive” operation anyway, and most or the time, exceptions will (and should) only be raised in exceptional circumstances (duh).

A call stack with just an array of return addresses isn’t very useful. We want to know where in the source code those addresses are. Converting an address to a source location is called symbolication. For each address, we would like to know the following things:

We store this information in a record of type TgoCallStackEntry:

Note that the addresses are of type UIntPtr. These are unsigned integers, so they can easily be converted to text. But the size of these integers match the size of a Pointer. So they are UInt32‘s on a 32-bit system and UInt64‘s on a 64-bit system.

Ideally, we also want to know the exact line number in the source code, but unfortunately Delphi doesn’t provide this, even when “Full Debug Information” is enabled. But by calculating the offset in the routine as mentioned above, you at least get an idea of how far “into the routine” the error happened.

So we want to know the name of the routine associated with an address. iOS provides a one-step API to convert all addresses returned by backtrace to an array of symbol names, called backtrace_symbols. The returned symbols are strings that contain additional information, such as addresses and module information. We would have to parse this string to retrieve this information.

There is a better solution that also works on Android. The dladdr POSIX API, converts just a single address, but returns all information in a nice record of type dl_info. You call it like this:

We care most about dli_sname here. This is a MarshaledAString containing a mangled version of the symbol name. It may look like this:

This looks mangled indeed. You can probably figure out that this is somewhere inside the System.SysUtils.TStringBuilder class, but what about the last part of this string?

Delphi uses the name mangling scheme that is defined in the Itanium C++ ABI. We could try to demangle it ourselves using the specification. However, the mangling scheme uses some features (such as substitutions) that make this a non-trivial operation.

But fortunately, there is a (somewhat hidden) API for this called __cxa_demangle. On iOS, this is part of libSystem and we have to import it ourselves again:

You feed this API a mangled name and it converts it to an unmangled C++ name. You can demangle the name to a buffer you manage yourself, by filling in the output_buffer and length parameters. But it is easier to set these parameters to nil and 0 and have the API allocate the buffer. In that case, you need to call Posix.Stdlib.free to free the returned buffer. So you can call it like this (using the Info.dli_sname value returned from dladdr above):

This Status parameter is filled with the demangle status. We can ignore this and just check if the function returns a non-nil value. For the mangled symbol __ZN6System8Sysutils14TStringBuilderC3ENS_13UnicodeStringEi, the result will be:

I went it a little bit further by creating a utility that tries to convert this C++ symbol to a Pascal symbol. It is called goCppSymbolToPascal and you can find it in the unit Grijjy.SymbolTranslator. Running this on the C++ symbol above returns:

It omits the System namespace and tries to convert C++ types to Pascal.

The TgoExceptionReporter only does this for symbols that are defined in the module representing your app. For symbols in other modules (like system modules), it uses the C++ version.

Putting it all together

You can’t build a house with just 3 lego bricks, but it is enough to get some basics going. When the TgoExceptionReporter class intercepts an exception, it creates a report of type IgoExceptionReport. This interface contains 4 properties:

The IgoExceptionReport class uses Delphi’s messaging framework to broadcast a message containing this report to anyone interested. So the basic workflow for using TgoExceptionReporter is:

However, because the app may be unstable now (depending on the type of exception) it may be safest to just write the report to disk and terminate the app (by calling Halt). Then, the next time the app starts up, you can check for this file and handle the report at that point.

Remember that this message can be sent from any thread, so if you are going to access the UI, you need to synchronize it with the main thread. In the example above, I choose TThread.Queue to do this, so it doesn’t block.

You can use the sample to generate different kinds of exceptions: 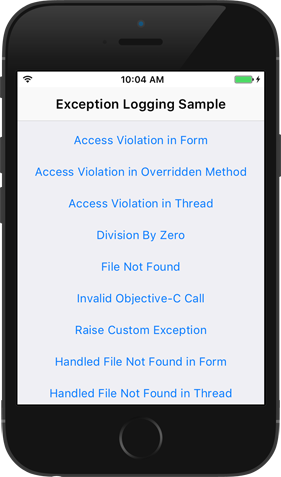 In this example, the error occurred 120 bytes into the ButtonDivByZeroClick method. The call stack shows how it got there.

Where to go from here?

As mentioned before, this is in no way a complete error reporting solution. But the building blocks presented here may help you build one. Building a robust error reporter is hard. These are some things you may want to keep in mind:

I hope the building blocks presented here help you get started. Do whatever you want with them. Just don’t hold us responsible if anything bad happens…

20 thoughts on “Build your own Error Reporter – Part 1: iOS”